Newspaper received within the Chapter :

Available commercial establishments in the Chapter :

Paved roads through the chapter area:

After the “long walk” return from Fort Sumner, Navajos resettled in the Lupton area.  Trading posts were established during the 1930s and served as the only outlets for Navajo families to purchase goods, unless they went to Gallup.  Lupton is Interstate-40’s scenic byway of the Navajo Nation.

Lupton Chapter is located in the south, central part of the Navajo Nation within District 18 and the Fort Defiance Agency.  The chapter lands are totally situated in Arizona.  The AZ-NM state line makes the eastern boundary.  Neighboring chapters include: Manuelito to the east, Nahata Dziil to the south, Houck to the west, and Oak/Pine Springs to the north.  Window Rock, capital of the Navajo Nation is 27 miles to the north and Gallup, NM, the closest city is 25 miles to the east.  The Navajo name “Tse’si’ani” infers to a large sandstone formation within one-half mile northeast of the chapter house.  The Navajo name means “rock in-place”.

The chapter area is roughly 80,140 acres, or 125.2 square miles.  Most of the land status is tribal trust, interspersed with individual Indian allotment and private lands.  The chapter land is divided into three geographical parts.  The northern and south highlands are generally not inhabited.  Most of the chapter’s population lives in mid-section, or valley section, which extends northeast to southwest.  This mid-section is sliced up in parallels formed by natural terrain of mesas and the Rio Puerco.  The river carves out the flat lands of the valley in the mid-section and creates a natural barrier for passage north and south.  Man-made structures, mainly the railroad, I-40 and frontage roads, follow the Rio Puerco.  These structures also take up sizeable strips of land and minimizes potential for development.

The Community Resident Survey (CRS), under the Community Land Use Planning activity, showed that 31.7% of all chapter households still need running water services and only 5% needed electrical power.  These needs are more prevalent on the “south side of the Rio”.

Over 28% of Lupton households have grazing permits, showing that area residents still rely on livestock production for subsistence.  Grazing opportunity is minimal due to the land subdivision as described above.  The CRS revealed that the same percentage of households do farming.

The valley surrounding the Lupton community is very scenic with the varying tones of off-white to yellow and red sandstone formations.  To the east of the chapter house across the Rio Puerco are high red mesas towering 900 feet above the base of the valley.  Scores of red sandstone monoliths rising just as high are separated from the main mesa and make for a very interesting background.  The red rocks glow even redder in the light of the setting sun.  The movie “Hallelujah Trail” was shot there and in parts of New Mexico and California.  The film was released in 1965.  Many local extras played background roles and in support of the actual shooting.  Following is a synopsis of the movie:

THE HALLELUJAH TRAIL is a slapstick comedy starring Burt Lancaster as cavalry officer Col. Thadeus Gearhart, set just before the winter of 1867, when the boomtown of Denver realizes it’s almost run out of whiskey. The perenially drunken Oracle Jones (Donald Pleasence) hatches a plan to bring a wagon train of whiskey to Denver before winter sets in. Newspaper editor Hobbs wires temperance leader Cora Massingale (Lee Remick) about the shipment, and a group of Sioux Indians also takes an interest in the booze. Col. Gearheart leads a company assigned to protect the temperance contingent, which intends to head off the train, and Capt. Slater (Jim Hutton) leads another, assigned to protect the train. A Denver citizens group, led by Clayton Howell (Dub Taylor), is also headed for the train, not to mention the Sioux. When the Teamsters suddenly stage a sit-down strike, the train is left wide open to attack. This odd little film, based on the novel by Bill Gulick, features a star-studded cast and a score by the great Elmer Bernstein.

Another scenic attraction nearby is the “Tea Pot” sandstone formation located above a cove nearly 3 miles north of the Lupton Chapter house and north of Navajo Route 12.  The site was once proposed as a Tribal Park. 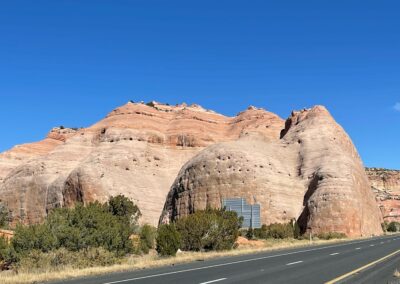 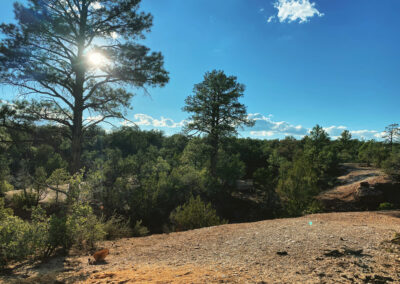 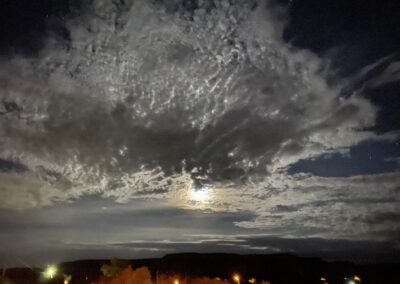 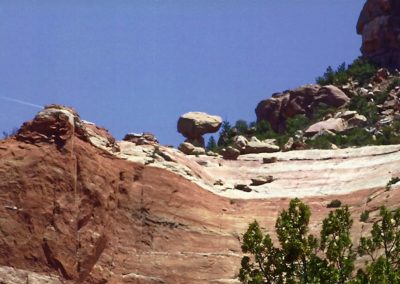